Innerpreneuring and the Bigger Movement Afoot

Excitement Over the Creative Class

When I learned about innerpreneurship a few months back, I knew there was a bigger idea involved. I couldn’t put my finger on what it was exactly until I started paying closer attention.

Everywhere I went, I heard rumblings of the ‘creative economy’, of this ‘creative class’ whose importance was rising. I credit this to Richard Florida and his series of books on the topic. Bill Gates also spoke recently of the need for ‘creative capitalism’ as a solution to the world’s problems. It seemed to me, all of the sudden, the Western world was now in love with creative people.

The ideas these men keep circling around are purely economic. They believe that being creative and inventive will be the key to business success in the twenty-first century. That a country’s economic success will be determined by its ability to mobilize, attract and retain human creative talent. No wonder us ‘creatives’ are suddenly the belles of the ball. People’s priorities always seem to shift when money is involved.

What I noticed — as I listened to the echoes of businessmen praising and stroking the ‘creative class’ and the ideas we would bring — was that no one was addressing who we are as group and why we are so unique and valuable. I wondered why we were so damn important in shaping the twenty-first century world.

A week or so ago, I found out why.

You Say You Want a Revolution?

I learned that there is a revolution stirring, only it isn’t being fought with guns and brawn. It’s a cultural revolution and it has been taking shape under our noses for the last 40 odd years.

Think of ‘culture’ as the solutions to the problems and passions that people consider important in each time period.

You are A Cultural Creative

And I bet you’ve never heard of yourself.

And you have always felt different because of it.

Read a complete list of the qualities of a Cultural Creative

We Could Fill Russia

Would you believe me if I told you there were at least 100 million people throughout North America and Europe who identify with the above statements too?

Cultural Creatives are a real, identified and coherent subculture of the Western world. You can think of yourself, the innerpreneur, as simply a Cultural Creative who owns a business.

Since the 60’s, more and more people’s worldviews (what they believe is real), values (what they hold important) and ways of life (how they live) have been shifting away from the two traditional ways of thinking.

I was astonished to learn that millions of people live and think the way I do. It was especially surprising since I seemingly developed my ‘life truths’ all by myself and in the face of a culture that consistently insists that my thinking is wrong.

But we, as a group, have a big problem — we aren’t aware that we exist as a collective body — at least not yet.

The Two ‘Established’ Schools of Thought and the Third ‘Ignored’ Alternative

I’m sure you recognize the below two points of view.

Modern Values (or seeing the world in black)

Modern culture is what many would call ‘normal culture’. It is comprised of the people who believe that the commercial urbanized world we live in is the obvious best way to live. It’s the culture you find in anything mainstream, from TV to newspapers to magazines. It is the standards and rules we live by daily.

Traditional Values (or seeing the world in white)

Traditional culture is what many would call ‘cultural conservatism’. It is the people who, by the most part, are caught up with just getting by in life. They thrive on shared values and familiar customs. The culture is not primarily about politics but rather about beliefs, ways of life and personal identity.

The above two ways of thinking are represented daily in our culture while the third alternative, the Cultural Creative way, has been ignored almost entirely.

Cultural Creative Values (or seeing the world in shades of gray)

We are simply a group of people who have discovered our own truth our own way. Each of us, independently, has made a shift away from established culture. We are not represented as a group because we do not realize we are thinking as a unit. We do not know that we are a million voices strong.

The Rise of the Cultural Creative

Visionaries and futurists have been predicting our emergence for over two decades. And in 2000, in the text, The Cultural Creative, our way of life was finally identified and labeled by a husband and wife psychology-sociology team. They studied us for thirteen years, coined the term ‘Cultural Creative’ and deemed us the leaders of the long-anticipated cultural movement.

So you see, this is why we are so important to the future of the world. We are the future because we look towards it and shape it. We don’t look behind like the traditionals or straight ahead like the moderns.

And now we find that our time has come. The modern model of thinking doesn’t seem to be working out quite as well as everyone expected.

What We Need Now

We need one thing – an awareness that we exist as a collective group, that ‘we’ are a part of an ‘us’. We need to stop feeling so alone. There are millions of us sharing a common goal and dream. Once we realize this, we will begin to understand how truly powerful our collective voices are.

We will change the world. Just ask Bill Gates.

SHARE
← Simply Entrepreneurs We Are Not How We Got Here: Becoming a Cultural Creative →

I am not with them. I am without. I witness the world being birthed anew. I know nothing more. I feel so much more. And so, I am without words. Unable to...

Giving Space to Your Creations

There is immense value in leaving, and then returning to, your creations. With a little bit of space, your expressions feel all the less personal. They no...

Distracted by the Noise

What distracts you from your goals? What leaves you questioning the path you are currently on? All around you are distractions and noise. People, places, and...

We need to resolve our past, so we can expose our truth and move forward with our lives. We are drowning in our unresolved emotions. Unrecognized, they weigh...

Innerpreneuring and the Bigger Movement Afoot 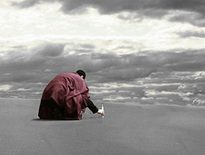